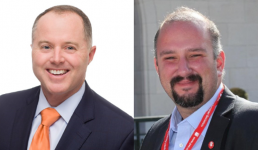 Cruise ships around the world are preparing to return to service this spring and summer in different places. For sailings to happen, a number of actions must successfully come together. Industry experts will address the present challenges facing the industry.

CV:Our Guest Speakers will share their insights of the Cruise industry's return to Service:

Mr. Donald Brown:
Donald Brown is Vice President, Maritime Policy at Cruise Lines International Association (CLIA) in Washington DC. He develops, presents, negotiates, and implements global industry positions on legislative, regulatory, and policy matters involving security, environmental stewardship and health. He leads delegations to the International Maritime Organization where he represents the global cruise industry during international treaty negotiations and other matters. He is also the designated Secretary to the CLIA Global Committees on Maritime Security Matters and Marine Environment Protection Matters.
Prior to joining CLIA, he served in the U.S. Coast Guard at the rank of Commander. His most recent assignment was to the Office of Maritime & International Law where he provided agency-wide legal counsel to senior officials and federal interagency leaders on transnational maritime threats, with specific expertise in facilitating others to reach agency, national, and international consensus on policy matters. Previous duty assignments include U.S. Northern Command and NORAD, speechwriter and special assistant to the Coast Guard Commandant, Special Assistant U.S. Attorney in the Southern District of Florida, Rescue Coordination Center Miami and four years of at-sea experience aboard Coast Guard Cutters ESCANABA (1st Lieutenant) and VASHON (Executive Officer).
Donald is a 1993 graduate of the United States Coast Guard Academy where he earned a Bachelor’s of Science in Government. In 2003 he graduated Cum Laude from the University of Miami School of Law where he served as Editor-in-Chief of the Inter-American Law Review. He has also served as a Visiting Professor of Law at the U.S. Naval Academy for Piracy, Maritime Threats, and the Law of the Sea.

Mr. Nikos Mertzanidis:
Nikos Mertzanidis is the Director for European Government Affairs in CLIA Europe, responsible for port and destination, taxation, tourism, public health and crew issues. Born and raised in Greece, he studied political science and international relations at the University of Macedonia in Greece, working in parallel for the UNESCO Chair for Intercultural Policy. After concluding a Master’s programme in international politics at the University of Aberystwyth, he moved in Brussels in 2010 working at the Constitutional Affairs Committee of the European Parliament and later as chief lobbyist for Imperial Brands. Nikos is a long-standing member of the International Political Science Association and the Society of European Affairs Professionals.

We value your privacy
We use cookies to personalise content and ads, to provide social media features and to analyse our traffic. We also share information about your use of our site with our social media, advertising and analytics partners who may combine it with other information that you’ve provided to them or that they’ve collected from your use of their services.
Manage options Manage services Manage vendors Read more about these purposes
Customize
{title} {title} {title}